After months of sketching, research, iterations, refinements, testing, and establishing partner relationships — we launched. With a little help from Product Hunt, WhiteAlbum struck a chord. Some loved it, some hated it. Either way, people were talking about WhiteAlbum. Even better, people were downloading and using our little disposable camera app.

We were sending albums all over the world and soon realized that WhiteAlbum had real potential to grow into a great business. We got to work developing and designing new features to evolve the app and enhance the experience. Our vision for the future was bright. But in order to get there, we realized we needed more financial support to make it happen.

Up to this point, WhiteAlbum had been completely supported — and funded — by Mint Digital (much like their other products). To keep WhiteAlbum alive and to build the future we envisioned, our team needed to raise capital.

We gave ourselves a deadline to complete our fundraising. But unfortunately, we didn’t meet that deadline We weren’t able to secure funding which lead to much thinking, and ultimately a very tough decision.

The team, marketing and financial resources needed to build WhiteAlbum into the market-defining product we wanted it to become were simply to high. We also weren’t as profitable as we’d hoped to be by this time. So with all things considered, we’ve collectively decided to bring WhiteAlbum to a close.

Yes, we have thousands of existing, satisfied, paying users. We’ve had the pleasure of printing personal, private, goofy, serious, mundane and hilarious photos for people around the world. We’ve heard amazing and sometimes touching stories from our customers. We’re unbelievably proud of what we’ve built. And now, we’re incredibly sad to stop the presses.

We want to thank everyone for all the love, encouragement and support over the past few months (or more). And if you’ve ordered photos from us, we hope they stay with you for a very, very long time.

WhiteAlbum
Greg, Will, Tim and the rest of the WhiteAlbum team (aka Mint Digital)

We knew this initial hurdle of early traction was a doozy.

Luckily, Ryan Hoover over at Product Hunt stepped in. Like a shepherd showing us the way.

Ryan got early word of WhiteAlbum, liked the idea, and offered to feature us as an Exclusive Hunt on Product Hunt (for those that don’t know, Product Hunt features startups and new ideas that are voted up by the community, with a daily audience of about 90,000).

Obviously, this was a great opportunity.

Being a fan of the site, we knew how the system worked. A featured spot was a definite push into the limelight, but there was work to be done in order to stay there.

WhiteAlbum went up at about 6:30am. That’s when we started our marketing outreach — and didn’t stop for the next 18 hours.

We went on a tweeting spree. Tweeting at people, at blogs, websites, even celebrities. Retweeting whenever we could from multiple accounts. The outreach efforts also extended to emailing, texting, Facebooking, and Instagramming.

We even tipped off people the day before to get them ready for the push.

At the end of those 18 hours, WhiteAlbum found its way into dozens of articles on websites like PetaPixel and TechCrunch. Even more over the next few days.

That number is still growing. Leading to tens of thousands of photos being snapped, albums being printed and shipped, and people fully embracing the surprise and delight of anticipation.

Come for the idea, stay for the quality

We think people are initially attracted to the concept behind WhiteAlbum because of its similarities to a disposable camera. Not knowing how your photos will turn out, delayed gratification, and taking photos that you know will be printed without seeing them first.

But that’s where the differences end.

WhiteAlbum is like a disposable camera, just much, much better.

We wanted to build a product that focused on quality. We spent months finding the perfect paper and the right printing partner. We spent months sourcing the best packaging company to create our custom box.

We knew people were going to like the concept — and they’ll love the quality. 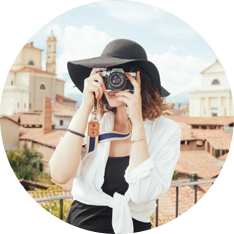 We were lucky enough to get over that initial hurdle of early traction thanks Ryan and the Product Hunt crew.

Now that we’re off on the right foot we can get beautifully printed photos in the hands of a lot more happy folks.

In a lot of ways, WhiteAlbum is similar to a disposable camera.

It’s casual, great for lots of occasions, you enjoy the anticipation of getting your photos, take each picture knowing it’ll be printed on real paper, and you don’t see your photos until they’re in your hands. A fun, simple experience.

But that’s where the similarities end.

Here’s how WhiteAlbum is different:

Our photo quality is fantastic — and that’s no accident. We spent over 6 months finding the perfect paper. Sourcing contacts, searching online, dozens of calls, and lots of in-person meetings to go over samples. Stacks and stacks of samples.

An it was worth it. The best word to describe our photos is Premium.

On top of all that, they actually smell pretty good. Seriously.

We spent weeks designing, sourcing, and prototyping the perfect box to hold your photos in just the right way. A box that protects them during shipment. A box that looks great in your hands and on a bookshelf.

The final product is a simple, beautiful box that perfectly hugs all your photos. It has a soft finish and a spine that’s intentionally left blank for you to add a your own title.

A disposable camera is an old, outdated, plastic relic.

I don’t need to preach why taking photos on a smartphone is better than a disposable camera, but here are a few points:

At the end of the day, the experience of WhiteAlbum is all around better than a disposable camera. Better photos, a real package, modern technology.

We worked hard to create a simple, seamless user experience that is heightened by our top quality photos and custom packaging.

For $20, you aren’t just getting 24 cheap glossy photos. You’re getting 24 premium printed photos on luxury paper, shipped in a simple, beautiful box.

Oh, and did we mention we ship anywhere in the world for free?

WhiteAlbum was created for quality.